The guerrilla fighter Helbest Koçerîn, whose recordings were published in Şehîd, was killed by the use of these agents.

by Firaz Dağ
in All News, Editorial, Headline, Kurdistan, Middle East, News, Your Silence Kills
A A
0 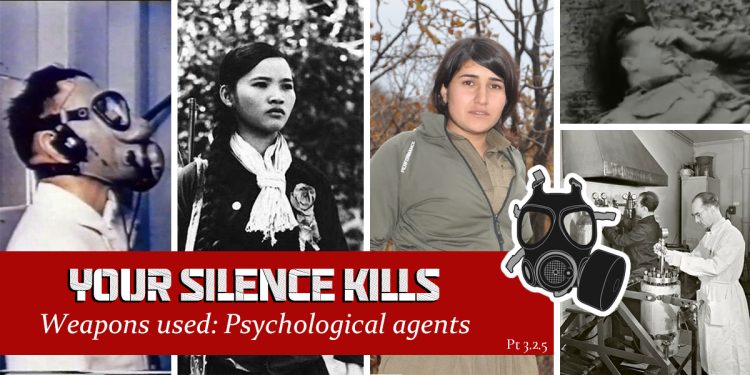 These warfare agents that had already been used by the U.S. military in the war against the Revolutionary Movement in Vietnam are now being used by the Turkish occupation army, the U.S.’s NATO partner against the revolutionary guerrillas in Kurdistan. Because of the massive bombings and the use of chemical warfare agents against the revolutionary movement in Vietnam, at that time in 1968, mainly the students stood up and demonstrated against the hegemonic ruling policies in all parts of the world within the framework of their human conscience. Today, although there are isolated protests against these crimes of the Turkish occupying state, which is supported by NATO in its war crimes, they are far from having the scale and influence they should have against such war crimes against humanity.

This part of our dossier will look at these substances and examine their genesis, as well as their impact, in more detail:

After the Hoffman-La Roche company in Nutley (USA) synthesized various esters of a secondary alcohol during a research program in 1950 to find antispasmodic (spasmolytic) agents, benzilic acid ester of 3-quinuclidinol was intensively investigated by Leo Sternbach’s research group under the company’s internal designation Ro 2-3308 and a patent application was filed for its production.

During the Cold War, developers of chemical weapons became aware of the substance, so that the U.S. military began clinical studies. Between 1959 and 1975, around 2800 soldiers are said to have been contaminated with BZ, while research with the drug LSD also took place. As a result, it was found that BZ was more suitable as a combat agent than LSD.

According to various journalists, BZ was used in the Vietnam War. Officially, the US stocks of this psychological warfare agent were destroyed in 1990.

According to eyewitness reports of doctors, BZ under the name “Agent 15” was allegedly used by Syrian troops against the rebels on December 23, 2012. The U.S. government has officially distanced itself from these claims.

Ingestion of this substance first causes headaches, confusion, hallucinations, then anxiety, difficulty concentrating, general restlessness alternating with apathetic phases. After a short time, the affected person is in a state of complete loss of reality. She no longer has conscious contact with her environment. Physically, dry mucous membranes, reddened skin and constipation are also observed.

The average duration of action is 3 days. However, relapse of individual symptoms is possible for up to 6 weeks. It has been reported by affected soldiers that in individual cases permanent changes in character have occurred.

In the military, this substance is distributed in the form of gas, rendering those affected practically incapable of combat and action immediately. The effect lasts for at least three days, but individual relapses can continue for 6 weeks. After recovery, those affected can only remember the time before the contamination.

Since 1997, FC – like other chemical weapons – has been officially outlawed internationally by the Chemical Weapons Convention; its development, production and stockpiling are also banned.

In an interview Murat Karayilan gave in a special broadcast on Stêrk TV, the member of the PKK Executive Council reported, “Another gas used by the occupiers makes the people affected sluggish, causes memory loss and makes them collapse. The person is immobilized and paralyzed at times,” Karayılan describes the unknown chemical. This gas had been used at Girê Kartal and other places, but could not be identified so far. However, the effects described point to a narcotic.

🔴 #HPG commander Murat Karayılan gave details of the #chemical agents that the #Turkish military have used against his forces in the isolated and cut off mountainous areas of #Kurdistan Region of Iraq.https://t.co/bKW8lx5DyM pic.twitter.com/0qBc3fExnv

Fentanyl is a synthetic opioid used as an analgesic in anesthesia (for anesthesia) and for thearpy of acute and chronic pain and was developed in 1960 by the Belgian chemist Paul Janssen.

In addition to their use in medicine, fentanyl derivatives have also been studied for their usefulness as chemical warfare agents.

Russian special forces reportedly used a gas based on fentamyl derivatives to end a hostage situation in Moscow’s Dubrovka Theater in October 2002. In the process, 128 people died from respiratory arrest. President Vladimir Putin spoke of a “new weapon” at the time, and his Health Minister Yuri Shevchenko said that derivatives of the anesthetic fentanyl had been used “among other things.” This would have been the first known case of the use of anesthetics as weapons.

Likewise, a derivative of this drug was reportedly used by a commando of the Israeli intelligence agency Mossad in an assassination attempt on Chalid Masha in Jordan in 1997.

The derivative was much more potent than fentanyl, was absorbed through the skin (it was sprayed on the head), and was intended to kill in a few days with the appearance of natural death. The Mossad agents were arrested immediately after the operation, and Israel, under diplomatic pressure, subsequently disclosed to the Jordanians the nature of the agent and the effective antidote (naloxone) with instructions on how to treat it.

Fentanyl was also used in an active ingredient mixture to execute a felon at the Nebraska State Prison on August 14, 2018, because the other toxins that were otherwise used were more difficult to obtain.

Fentanyl has a strong pain relieving effect and besides that it also has antidepressant, pulse slowing, blood pressure lowering and euphoric effects. Fentanyl is an opiate that can also be compared to morphine, but has a higher potency, while the duration of action is shorter than morphine. The effect starts after 5 minutes and can wear off after 3 to 12 hours.

Fentanyl is taken injectable in the medical field, but is also common in powder and tablet form. As an aerosol nasal spray or patch, it is effective through the skin and mucous membranes.