So, after we devoted the last part of the dossier to the nerve agents, today we will try to give an overview of the so-called pulmonary agents. 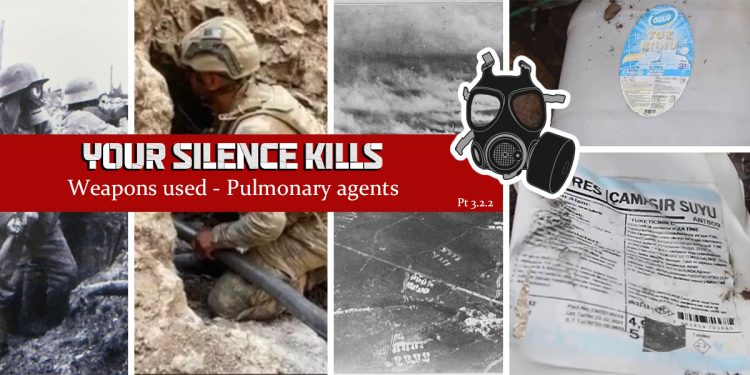 NEWS CENTER – Pulmonary agents, as the name suggests, are used to truly suffocate the enemy forces. The Turkish occupiers who said as part of their invasion operation that they would take the breath away from the guerrillas have followed up their words with corresponding actions in this regard.

There have been many clear evidences in the past that made it clear that the Turkish occupation soldiers used pulmonary agents, especially clorgas and chloropicrin against the guerrilla resistance areas. So, after we devoted yesterday to the nerve agents, today we will try to give an overview of the so-called pulmonary agents.

The development and use of this warfare agent, like the nerve agents, was also particularly driven by the Germans. A cruel inheritance that now the Turkish fascists used in the fight against the freedom movement of Kurdistan and the freedom efforts of the Kurdish population.

Footage released to the ANF news agency on April 8, 2021, documenting evidence that emerged from under the melting snow in the Werxelê resistance area that the Turkish army had apparently left there before its withdrawal, documented canisters of highly concentrated hydrochloric acid and bleach. The accompanying report stated:

“In the footage, it can be seen that dozens of liters of bleach, hydrochloric acid and various substances were used mixed together by turning them into gas. It is known that even a small amount of the mixture of low-density spirit salt and bleach, which is also used in cleaning the house, has a toxic effect. From these findings, it is clear that the Turkish state is trying to poison the guerrillas by mixing and using these substances in large quantities.”

The IPPNW, referring to this evidence, concluded in its published October 2022 report:

“1. An empty 30-liter container of hydrochloric acid (probably at a concentration of about 20%, sold as a cleaning agent),

2. An empty container for 5 kg of bleach (also sold as a cleaning agent).

“These agents can easily be used to produce chlorine, a gas known to have been used as a chemical weapon by, for example, the Assad regime in Syria.”

Add to this the previously named multiple reports by HPG that the chemical weapons used against the guerrillas gave off the smell of chlorine and bleach.

Pulmonary agents are the oldest combat agents used in war. The best known is chlorine, although chlorine has lost importance today due to the unsafe blowing process, the warfare agents phosgene and diphosgene, as well as chloropicrin are still important in the military context.

The name green cross comes from the marking of shells in World War I with green paint. The cap of the fuze was painted green and there was a green cross at the bottom of the cartridge. The grenade itself was filled with the warfare agents phosgene and diphosgene. In common parlance, lung warfare agents were later generally referred to as green crosses.

In 1774, the German-Swedish pharmacist and chemist Carl Wilhelm Scheele discovered chlorine. During World War I, chlorine gas was first used as a chemical weapon by German troops. The use of chlorine gas on April 22, 1915, in Flanders near the town of Ypres resulted in many deaths and numerous soldiers, some of whom were injured for life. After a short time, however, chlorine gas was replaced by the more effective poison gas phosgene.

The warfare agent phosgene was first used by the Germans at Ypres on May 31, 1915, with a mixing ratio of 95% chlorine gas and 5% phosgene. Phosgene itself was discovered as early as 1812 by the British chemist Sir Humphry Davy. The names carbonyl chloride, carbonic acid dichloride, carbon oxychloride are also used for phosgene. Soon after, people switched to the more effective pure phosgene. In World War I, phosgene, as a chemical gas warfare agent (green cross), was responsible for the majority of the approximately 17,000 gas deaths of that war.

Watch the full video of the resistance in the tunnels here.

During World War I, chloropicrin or trichlonitromethane, also known as nitrochloroform or klop, were used as pulmonary warfare agents under the name Green Cross-1. Chloropicrin was discovered by the British chemist John Stenhouse.

Chloropicrin was also used in a poison gas attack in Sofia, Bulgaria, on April 9, 2004.

Inhalation of chlorine gas is toxic. With the moisture of the mucous membranes, formation of hypochlorous acid and hydrochloric acid occurs, which attack the tissues. Depending on the concentration, inhalation causes irritation of the mucous membranes, coughing, and in case of prolonged exposure, hemoptysis and respiratory distress, as well as suffocation, but chlorine gas also affects the eyes, skin and digestive tract. Chlorine gas is characterized by its green color and typical odor. Chlorine gas is also much heavier than air and sinks to the bottom. After inhalation of chlorine gas, the alveoli swell to a spongy mass, the lungs fill with fluid and prevent further gas exchange, suffocation occurs. A chlorine concentration of about 0.5% in the air we breathe is lethal to humans. Even quantities of 0.001 % chlorine in the air we breathe result in the first pathological effects. Inhalation of large quantities poses a danger to life.

Lung damage and, in the case of chronic exposure, cardiovascular damage are possible even after initial freedom from symptoms. Liquid chlorine is highly corrosive to the skin.

Since phosgene is poorly soluble in water, it can reach the blood-air barrier in the alveoli when it enters the lungs. The blood-air barrier allows rapid uptake of oxygen into the blood and release of carbon dioxide in the reverse direction. Small doses gradually decompose in the lungs with the moisture present there to form carbon dioxide and hydrochloric acid; the latter corrodes the lung tissue and alveoli. This leads after 2-3 hours to an agonizing cough, cyanosis (deficiency of blood pigment hemoglobin), and pulmonary edema, and is usually fatal. Death usually occurs while the patient is fully conscious. High doses can also cause death within seconds or minutes by causing high numbers of phosgene molecules to react with amino acids in alveolar walls and prevent oxygen exchange. Unlike mustard gas, phosgene acts only when absorbed through the lungs, not through the skin.

The affected person shows anxiety, signs of impending shock, and suffers chest pain. Poisoning can cause severe illness up to death by suffocation and can occur for hours after ingestion. As little as 0.12 g per m³ of chloropicrin in the air is life-threatening.

A new song for the 50th anniversary of the PKK