In this part of the third section, we will focus on chemical weapons. To do this, we first look at the history of chemical weapons in general, and then more specifically at what chemical agents are used against guerrillas. 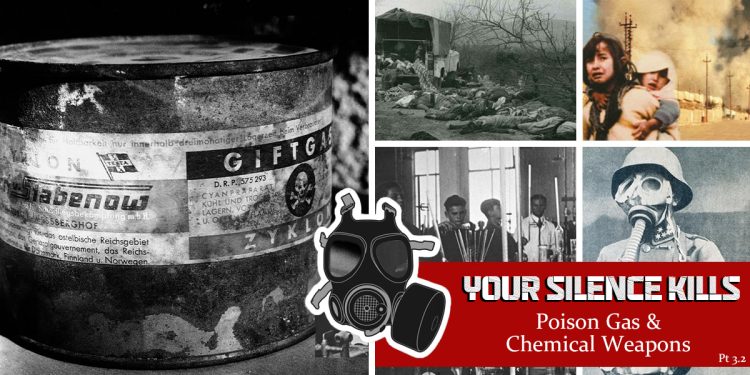 NEWS CENTER – In yesterday’s post of the “Your Silence Kills” dossier, we presented the history and effects of incendiary bombs, specifically looking at phosphorus and napalm bombs, which HPG says are being used in the war by Turkish occupation forces against guerrilla resistance areas.

In this part of the third section, we deal specifically with chemical weapons. For this purpose, we first deal with the history of chemical weapons in general, in order to then pursue more specifically the question of which chemical warfare agents are used against the guerrillas. We will present also the reports from International Physicians for the Prevention of Nuclear War (IPPNW) and Coalition Against Chemical Weapons in Kurdistan (CACWK) on this part of the dossier.

In the following parts, our news agency will then go into more detail about the individual chemical warfare agents mentioned, which were used according to HPG reporting, ANF news agency reports and the IPPNW report.

Chemical weapons, or chemical weapons, have a toxic (poisonous) effect through their solid, liquid or gaseous substances or mixtures. In conjunction with grenades, spraying devices or similar, they are used in armed conflicts to render the opponent incapable of fighting or acting, or to kill him.

Chemical weapons are believed to have been first used by the Spartans in the Peloponnesian War of 431 to 404 BC. Over time, chemical agents were further developed as a weapon in war. The first modern chemical weapons were used in World War I. The chemical warfare agents came from the chemical industry and were available in large quantities, such as chlorine, phosgene, hydrogen cyanide (prussic acid) or arsenic. However, these gases quickly evaporated, so that later most chemical warfare agents were sprayed as liquids (aerosols), stuck to the ground, clothing, skin and gas masks and penetrated the filters, which is why they radiated their effects longer than the gases. New warfare agents target not only the lungs, but also the skin, nerves and psyche. They penetrate through the skin into the bloodstream and spread throughout the organism. A well-known and important warfare agent of this group is sulfuric rust, also known as mustard gas.

The chemical warfare agents used in World War I included xylyl bromide (tear gas) and o-dianisidine chlorosulfonate, a fine crystalline powder that irritates mucous membranes. However, these substances were not resistant to heat or cold. The first major breakthrough in the name of weapons of mass destruction came to the Germans on the Western Front on April 22, 1915, at Ypres, where 150 tons of chlorine gas were used, causing about 1,200 to 5,000 deaths and 3,000 to 10,000 injuries. However, more precise casualty figures vary.

Between the two world wars, a massacre of colonies in the Middle East was implemented by the Royal Air Force in 1919 as part of colonial rule under the control of Winston Churchill. This involved poison gas operations against the Kurdish population in Silemani, southern Kurdistan. The list of criminal uses of chemical weapons is long, whether in Russia against the peasant uprising of Trambow 1920/21 or the use of chemical weapons against the rebellious Rifkabylen in northern Morocco, Spain. Poison gas bombs were also used in the Abyssinia War and by colonialist, Italian troops in Ethiopia.

In the fascist German Reich, the nerve agent Tabun was discovered in 1936, and in December 1939 its effects were synthesized with the even more potent agent Sarin. As a result, the I. G. Farben company in Dyhernfurth began producing tabun in the spring of 1942. In 1944, the warfare agent soman was also discovered in Heidelberg; this is a nerve agent that can be used as an aerosol or as a nerve gas. However, these warfare agents were not used during the Second World War. Instead, the prussic acid insecticide Zyklon B was used in the extermination camps Auschwitz-Birkenau, Belzec, Sobibor, Mauthausen, Treblinka and Lublin-Majdanek, as well as engine exhaust (carbon monoxide) for mass extermination.

The tons of chemical weapons produced by the German Reich were destroyed or succinctly disposed of by American forces after World War II. After 1945, chemical weapons continued to be used, most notably the use of napalm and Agent Orange (a herbicide used as a defoliant that was also contaminated with 2,3,7,8-tetrachlorodibenzodioxin) by the French-American occupation forces against the North Vietnamese Liberation Army FNL.

Thousands were murdered in the poison gas attacks on villages, towns and hospitals on the front lines, such as the poison gas attack on Serdeşt in eastern Kurdistan (Iran) on June 28, 1987, but the most famous example is the poison gas attack on Helebçe (Halabja) on March 16, 1988, in southern Kurdistan, in which some 5,000 Kurds were massacred and 7,000 to 10,000 were seriously injured. Many who were injured later succumbed to the effects of their injuries. During the attack, the Iraqi soldiers used several gases at the same time, such as the nerve agent Tabun, Sarin and possibly VX, in addition mustard gas and cynid warfare agent were used.

On July 23, 1989, a secret order to the Turkish Armed Forces was published in the Turkish newspaper Ikibine Dogru, ordering Turkish soldiers to “use tear gas and nausea-inducing gases if necessary” and to fill tunnels with poisonous gases.

In 2010, Bradfort University in England published a report showing that during the AAD arms fair in Cape Town that same year, Turkish CS grenades were on display, offered by the Turkish state-owned arms company Makina ve Kimya Endustrisi Kurumu (MKEK) and apparently produced for military purposes. 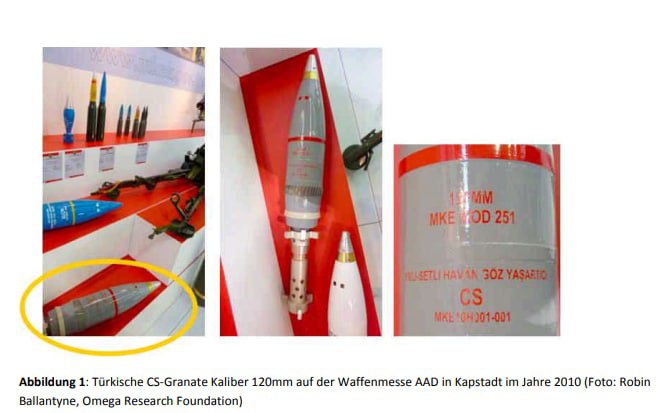 (Source: On the Possible Chemical Weapons Use by the Turkish Military – PDF in German: van Aken Chemiewaffen Türkei)

WHAT CHEMICAL WEAPONS ARE BEING USED AGAINST THE GUERRILLAS?

HPG reports have often attempted to circumscribe the chemical warfare agents, but a more precise definition can only be made through professional testing by experts, who are, however, prevented from sampling in the region and verifying the HPG’s claims by the forces of the KDP, which controls the surrounding regions. (See Steve Sweeny’s May 2021 report and IPPNW’s October 2022 report.)

The HPG report of 05 July said that six different chemical weapons had been used against the resistance areas and these were explained in the following words:

Chemicals that gave off brown and black fumes and burned the throat and eyes were spoken of. In addition, chemicals were described that had a bitter odor, were yellowish-green in color, and reacted when they came into contact with water.

Most importantly, the chemicals were described as affecting breathing.
In the Sept. 2 report, HPG reported chemical gases that:

On Sept. 11, the press center reported chemical gases that were allowed to taste like roses and leave red stains. A day later, a chemical was described that takes on a granular structure when it comes into contact with water and sticks to walls. Last, the Oct. 3 HPG report paraphrased a chemical that has a sweet taste and emits a strong odor.

The HPG Central Command administration announced on Nov. 27 that they have uncovered 5 types of chemical weapons. According to Murat Karayılan, commander of NPG Central Headquarters, the first one is a nerve gas. This gas is also known as Tabun. The second chemical weapon that causes people to suffocate contains chloropingas. This gas is also called “green cross” or “green cross.”

The third is a combustion gas. This gas burns and dehydrates people. It burns wherever it is used. The name of this weapon is Sulphur Mustant, another name is “Yellow Cross” or “Mustard Gas”. This gas gives a green color. The fourth chemical affects the nervous system of people and causes temporary paralysis. This gas was used in Girê Qertal, but has not yet been identified by name. The fifth gas is pepper spray or tear gas. When used in an enclosed area, this gas has a powerful effect and can cost lives.

In another report translated by the ANF news agency, the following was made clear:

“The Turkish army has been using chemical weapons in its dirty war against the guerrillas on and off for years, but never as intensively as in the last two years of war. Chemicals of all kinds;

In particular, chemicals that stun and paralyze the nervous system are used intensively. ne of the crimes against humanity committed by the fascist Erdoğan-Bahçeli regime on the basis of the Kurdish genocide was the use of chlorine gas in war tunnels on September 9. In the statement of the HPG press center on 09 September 2022, the public was informed that chlorine gas was used against the guerrillas’ war positions and this was concretely proven by the guerrillas.”

The invading army used chemical weapons not only against the guerrillas, but also against the civilian population. For example, various reports have been made public in the past in which civilians were injured by attacks using chemical gases and poisons. However, the KDP government prevents this from becoming public and threatens people, as is also evident from the May 2021 report by British journalist Steve Sweeney titled “COLLUSION, CONSPIRACY AND CORRUPTION: A REPORT ON TURKISH WAR CRIMES AND THE USE OF CHEMICAL WEAPONS ON THE GROUND. – DOWNLOAD THE PDF HERE”

“In addition, it was reported by Kurdish media in October 2021 that 548 people who lived near the combat zone suffered from vision problems, watery eyes, headaches, nosebleeds, and skin rashes, and were threatened by the PDK not to speak out.”

The medical peace organization IPPNW (International Physicians for the Prevention of Nuclear War/Physicians in Social Responsibility) prepared a report on Turkey’s violation of the ban on the use of chemical weapons and attacks on Kurdish civilians and the Freedom Movement guerrillas in northern Iraq, southern Kurdistan of their investigations and findings obtained through a trip to the area from 20 to 27 September 2022. Commenting on the publication of the report on October 12, 2022, IPPNW stated:

“For over a year, there have been allegations from the Kurdish side that Turkey used chemical weapons. So far, there has been no clear evidence for this – even indirect evidence for this allegation was missing. This has now been provided by an IPPNW delegation from Germany and Switzerland. In their report, released today, the authors point to the use of tear gas as well as evidence of improvised chemical agents such as chlorine gas.”

In the following, the chemical weapons that have been used against the definitely against the guerrillas will be explained in more detail, however, only certain combat agents can be dealt with here by way of example and not all of them.

Thousands march in Bakur against the use of chemical weapons!