Today's section deals with the so-called eye-combatants, including irritant gases such as tear gas and pepper spray. 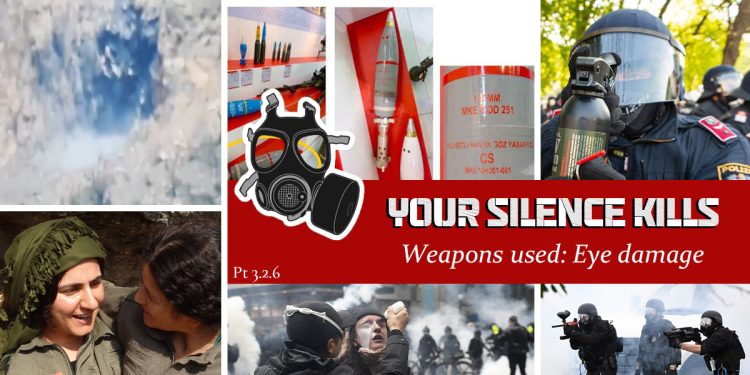 NEWS CENTER – Our dossier “YOUR SILENCE KILLS” deals in detail with the used chemical weapons and forbidden bombs of the Turkish occupying state, the backgrounds of these warfare agents and weapons of mass destruction, the supporters of these war crimes, in order to put an end to the public silence which is against the war crimes against the guerrillas of the freedom of Kurdistan.

The reality of the enemy, the fascist AKP-MHP regime, under whose leadership thousands of Turkish and Kurdish youth are murdered in the invasion and genocide war must be recognized. The reality of the hegemonic powers, NATO which supposedly prioritizes human rights and cites it as a justification to invade other countries, but in fact, like the regime in Turkey, only has its own power preservation in mind, must be realized. The reality of the use of such weapons, what that means, which meaning of the use of these weapons for mankind has, should lead itself each and everyone once before eyes and make conscious.

In this sense, each and everyone has the responsibility and duty to confront such crimes against humanity and not to tolerate that in the history of humanity once again massacres and genocide take place, which are based on the bloody legacy of the fascist ruling mentality.

The IPPNW, with the help of a medical delegation to investigate the allegations of the use of chemical weapons in the affected regions of southern Kurdistan from September 20-27, 2022, explained in the subsequent report published in October of this year, an incident from 1999 in which it could be clearly established that Turkey had used CS gas against the guerrillas. The report states:

“In an armed skirmish with the Turkish military on May 11, 1999, 20 PKK fighters were killed in a cave near Balikaya, southeast of Sirnak. The Red Crescent gave a German television journalist the remains of a grenade that had been found at the site. An analysis at the Institute of Forensic Medicine at the University of Munich detected traces of CS gas on the grenade remains. According to the German television magazine “Kennzeichen D,” the RP707 grenade is a type manufactured by the German company Buck & Depyfag and supplied to Turkey since 1995.

In addition, IPPNW pointed out that in 2004, it became known via a documentary on Turkish TV station TRT 1 about an anti-terrorist unit in Turkey that Turkish soldiers were training to use tear gas grenades in military situations and stated that in 2010, Bradford University in the United Kingdom published a report alleging “that Turkey’s state-owned weapons manufacturer Makina, Kimya Endustrisi Kurumu (MKEK) is manufacturing and selling 120 mm caliber CS grenades to other countries. These “MKE MOD 251″ grenades weigh more than 17 kg and have a range of more than 8 km, which makes them completely unsuitable for use against protesters and suitable only for military purposes. Such weapons, however, are banned under the Chemical Weapons Convention.”

The same statements of the IPPNW had already been made by Dr. Jan van Aken in a report of 30.11.2011, which was prepared on possible chemical weapons use by the Turkish military and which pointed out to the OPCW the urgent need for action.Besides, the report from 2011 dealt with a secret order, which was published on 23. July 1989, published in the Turkish newspaper Ikibine Dogru, ordering Turkish forces to “use tear gas and nausea-inducing gases if necessary” and to render tunnels unusable by filling them with “poisonous gas.

Chlorobenzylidenemalonic acid dinitrile or CS is a colorless, crystalline compound that is used as a tear irritant, i.e. tear gas, by the police, among others. The white, toxic and flammable substance has a pepper-like odor and its use in the form of sprays is therefore also known as pepper spray.

In 1928, inventors B. B. Corson and R. W. Stoughton developed this substance and it was not until 1960 that the US Army introduced CS as a combat agent. CS is said to have been used to a very large extent, especially in the Vietnam War.

CS has a direct effect on the neural pain center, but its effects vary from individual to individual. About 50% of people do not react at low concentrations, but in others, irritation with CS immediately causes symptoms such as watery eyes, coughing, stinging in the throat, nose and irritated eyes, and in some cases skin redness and itching. At a higher concentration, the odor affects humans and irritation of the eyes and respiratory tract occurs immediately. Profuse salivation and watering eyes occur. Inhaled in larger amounts, CS can cause respiratory distress, pulmonary edema (fluid in the lungs), nausea and vomiting, and even death. Studies have suggested that CS can cause severe lung damage, as well as significantly affect the heart and liver.

Indoor applications are particularly dangerous, as the lack of air circulation can cause more severe poisoning. The consequences are often pneumonia (inflammation of the pulmonary alveoli, with swelling and increased blood flow to the affected area of the lungs), bronchitis (inflammation of the brochi and toxic pulmonary edema (development of water in the lungs) and possible death. These latter severe complications sometimes occur days later.

In a study published by Uwe Heinrich on September 28, 2000, it became clear that if CS gas is used in a closed room, this may well lead to the death of the person affected. When dust from the compound is stirred up, explosive mixtures are formed with air. In case of fire or strong heating, decomposition into toxic vapors such as nitrous gases, hydrogen chloride and carbon oxides occurs. 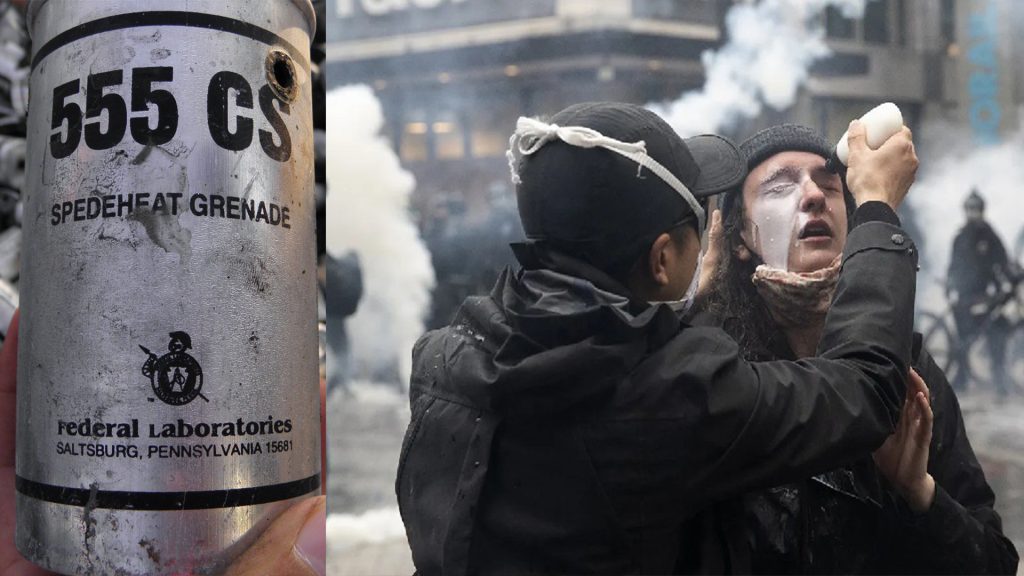 CS is poorly soluble by water and is also heavier than water. In water, it slowly sinks to the bottom, forming toxic and highly irritating mixtures. CS does not lose its effect even when diluted with water.

As a gas dissolved in dichloromethane or acetone, CS is used by the police and is used especially during unwelcome demonstrations and protests. However, international treaties on chemical weapons prohibit its use in war zones.

Chloracetophenone (CN) is a yellowish to white or also colorless to gray powder in the form of crystals. Information on the odor also differs. CN is said to give off a violet or apple blossom odor. CN is used in aerosol form as an irritant called tear gas.

Research occurred during World War I and World War II, but it was not used in the war. The U.S. used CN in Vietnam, the toxicity of CN being higher than that of CS, and therefore CS was substituted for CN in the field.

CN is three to ten times more toxic than CS gas. It also causes more severe damage to the lungs and cornea of the eye. CN also causes more severe damage to the skin. The low-volatility crystals dissolve poorly in water, but dissolve very well with organic solvents such as alcohol, benzene and ether. When heated, the substance decomposes to form toxic, corrosive hydrogen chloride vapors. An irritating and toxic fume is also produced in a fire.

Because the substance has a low vapor pressure, it remains effective longer in rooms, vehicles and clothing, so using CN indoors is very dangerous. At temperatures of 20 °C, CN evaporates slowly and concentrates in the air in a harmful way.

At concentrations of 10 mg/m³ and above, there is a severe burning, scratching and stinging sensation in the throat, nose and eyes. In addition, a strong flow of tears and saliva is triggered. Reddening of the skin, edema and shortness of breath are further signs. There is also a severe stinging pain on the skin, especially on injuries such as abrasions. Nausea and vomiting may also occur.Fainting and temporary loss of balance and orientation may occur.Skin rashes and atopic eczema have also been observed. As the concentration increases, painful conjunctival irritation, lacrimation and reabsorptive eyelid spasm occur. In addition, injuries may occur from the use of the explosive devices, etc. Differentiation between mechanical injuries and the toxic effects is often difficult. Pneumonia, bronchitis, and toxic pulmonary edema have often occurred in indoor applications. These latter severe complications sometimes occur days later. Fatalities have been reported.

CN is still available to paramilitary and police forces in small, gas-pressurized aerosol containers known as “mace” or tear gas. It has largely given way in use to pepper spray, which is faster acting and disperses more quickly than CN. 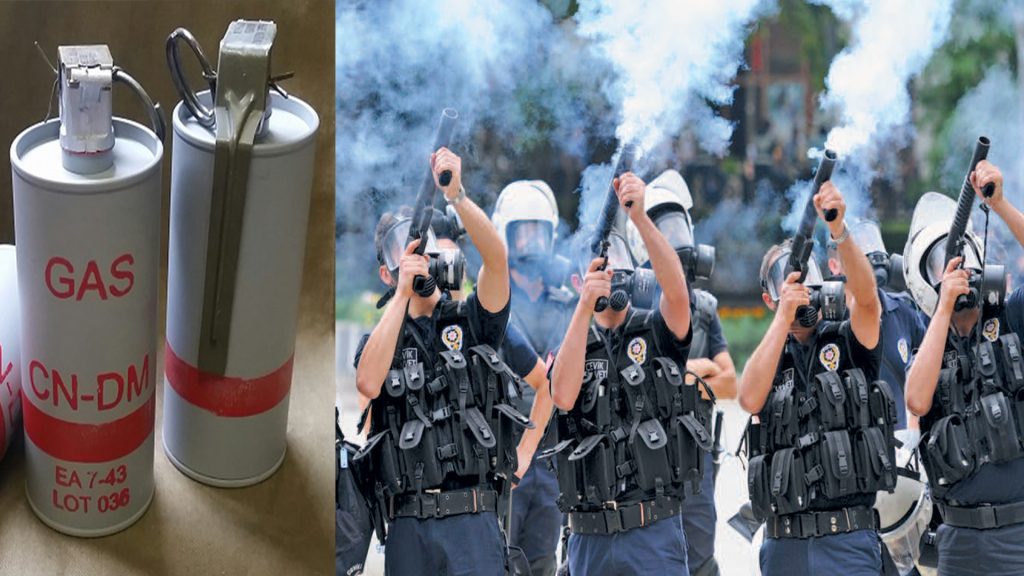