Another warfare agent that also gained gruesome notoriety during Hitler's fascism in Germany under the name Zyklon B is hydrogen cyanide also used against guerrillas. 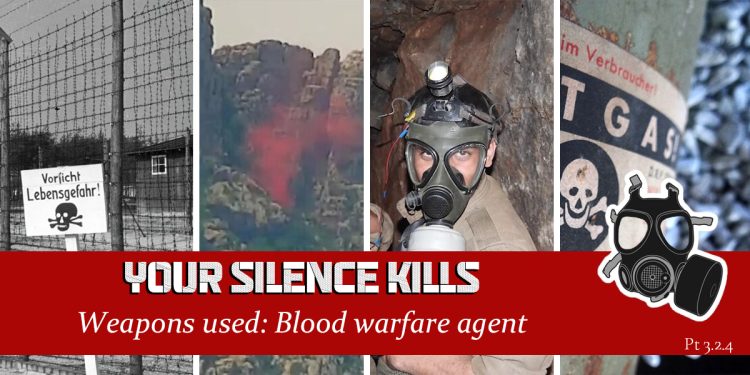 NEWS CENTER – Another warfare agent that also gained cruel notoriety during Hitler’s fascism in Germany under the name Zyklon B is hydrogen cyanide. In one of our news agency into German translated report of the news agency ANF from 13 September 2022 became clear that many further chemicals also this substance against the resistance areas of the guerrilla of the liberty Kurdistans are used.

“The Turkish army has been using chemical weapons in its dirty war against the guerrillas for years, but never so intensively as in the last two years of war. Chemicals of all kinds;

So, having dealt with warfare agents that attack the human nervous system, lungs, and skin, we devote this section to the so-called blood warfare agent hydrogen cyanide.

This colorless to slightly yellowish, flammable and very volatile and water-soluble liquid is highly toxic. In general, the odor of hydrogen cyanide is said to resemble that of bitter almonds, marzipan, but is also said to be perceived as “dull” or “pungent”. Often, however, no odor is detected at all.

Hydrogen cyanide is used in industry as a precursor and process material, but also for pest control.

The names hydrogencyanide, hydrocyanic acid, formonitrile, formic acid nitrile are also used for hydrocyanic acid, and it has gained particular notoriety under the name Zyklon B. Cyanide is also known by the military names AC (for hydrogen cyanide) and CK (for cyanogen chloride).

Hydrogen cyanide is very toxic and evaporates rapidly at room temperature. Inhalation causes the onset of the poisonous effect. Already 1-2 mg prussic acid per kg body weight have a lethal effect. The toxin can also be absorbed by the body through the skin and is further enhanced by perspiration, since prussic acid has a high solubility in water.

Cyanide gas is most dangerous in enclosed spaces and is less dense than air, so it rises. Hydrogen cyanide blocks the oxygen binding site in the body, preventing cells from using oxygen for energy; “internal asphyxiation,” or cell death, occurs. Since cyanide prevents the absorption of oxygen, it is particularly harmful to the heart and brain because the heart and brain consume a lot of oxygen.

A bright red coloration of the skin is a typical sign of poisoning, because the venous blood is still enriched with oxygen because the cells could not use it. A corpse that has died from hydrogen cyanide is therefore found to have typical cadaveric patches that are bright red, similar to those found in carbon monoxide poisoning.

People exposed to a small amount of cyanide by inhaling it, ingesting it through the skin, or eating contaminated food may experience some or all of the following signs and symptoms within minutes: Dizziness, headache, nausea and vomiting, rapid breathing, rapid heart rate, restlessness, weakness, and bitter almond odor when exhaling. If high amounts of the chemical agent have been ingested, additional symptoms include convulsions, loss of consciousness, low blood pressure, lung injury, slowed heart rate, and respiratory failure resulting in death or cardiac arrest. In such cases, a bright red coloration of the skin often fails to appear.

Prussic acid made a cruel name for itself as Zyklon B while the Nazis used this chemical weapon to murder thousands of people in the “gas chambers” at the Majdanek and Auschwitz-Birkennau death camps.

In the USA, prussic acid gas was used to carry out the death penalty until 1999; today, this method is only permitted in the USA if lethal injection cannot be used for some reason. In such cases, it has been observed that cardiac arrest usually occurs within 4 to 10 minutes, but it can last up to 17 minutes, especially if the affected person has been holding his breath or is only breathing shallowly.

The French army was the first to use prussic acid as a combat agent during the First World War. But the use remained relatively ineffective, because the German opponents were protected by novel filters in the gas masks. The usefulness of hydrogen cyanide proved to be poor, as the gas quickly dissipates. In modern ordnance, hydrocyanic acid is no longer used, but it can be added as a so-called mask breaker to quickly nullify the filter’s resorption capability and thus help the actual warfare agent to take effect.

Simko Dicila: "The doors of the free mountains of Kurdistan are open to the youth"