In Dersim Mustafa Kemal Ataturk used mustard gas against the Alevi population and caused a massacre with the support of the Germans. Today, this agent is still used by the fascist regime of Turkey against the guerrilla 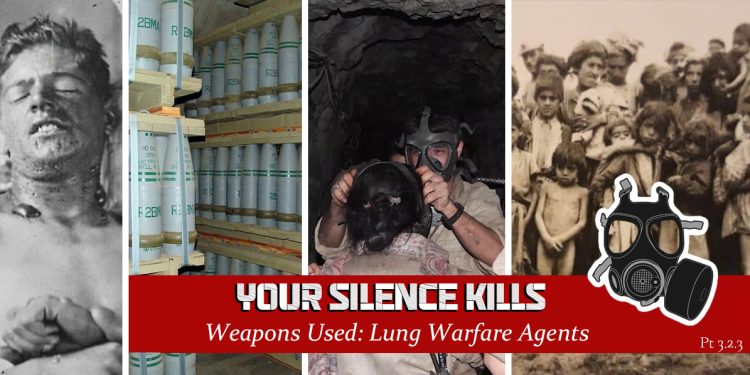 NEWS CENTER – Mustard gas, or Lost, earned an infamous name through the use of German soldiers in World War I. The gas which was sprayed with gas cylinders in the beginning changed its direction with the wind and also caused damage to soldiers on the German side. Later, artillery shells and grenade launchers were constructed for this purpose, with which the gas was fired at the enemy side.

Another combat agent with which the German state history made its hands bloody. When in 1937/38 the massacre of the Alevi population in Dersim took place, the fascist leader Mustafa Kemal Ataturk used mustard gas against the people in Dersim, which he had received from Germany before. Even today, warfare agents are used against the fighting Kurds of the Freedom Movement in the Free Mountains of Kurdistan, which the fascist AKP-MHP government has received through the support of NATO.

Mustard gas or Lost is the name of the chemical bis(2-chloroethyl)sulfide, which is used as a chemical warfare agent and has a corrosive effect on the skin. Other names for the agent include sulfur mustard, S-Lost, sulfur mustard, mustard gas, or mustard for short, yellow cross gas, yperite, or sulfur perite. The NATO code for this warfare agent is HD.

The liquid, colorless and odorless in pure form at room temperature, has an odor similar to mustard or garlic when not produced in a highly purified form.

In 1822, the Belgian chemist César-Mansuète Despretz, experimenting with ethene and sulfur dichloride, discovered the formation of a malodorous liquid. Various discoveries and experiments by different chemists followed until the German chemist Victor Meyer was the first to fully describe the chemical in 1886. The proposal to use this liquid as a poison gas came in turn from the German chemists Lommel and Steinkopf in 1916, who worked as collaborators of Fritz Haber at the Kaiser Wilhelm Institute. This is where the name Lost came from, which is derived from the first two letters of their last names.

As early as 1917, German troops used mustard gas for the first time at Ypres. Since mustard gas severely disfigures the people involved, it also had a psychological effect on the enemy soldiers and mustard gas became one of the most feared weapons in WWI. However, the death rate from mustard gas was much lower than that from phosgene.

After World War I, mustard gas was used extensively in 1925, with the cooperation of German chemist Hugo Stoltzenberg, against Kabylers resisting Spanish domination in Morocco.

During the fascist Nazi regime in Germany, mustard gas was produced in Munster and Ammendorf near Halle by the company ORGACID GmbH until 1942, but it was not used in World War II. After World War II, these stocks of poison gas were dumped into the Baltic Sea, which now leaks out of the barrels in small lumps that look like amber and washes ashore.

During World War II, the use of so-called mustard gas bombs became known; Polish troops used these bombs to blow up a bridge and mine a roadblock. After the German Luftwaffe bombed the Italian port of Bari, the bombings also hit the U.S. freighter John Harvey, which was loaded with mustard gas shells, among other things.

On October 03, 1935, Mussolini also used mustard gas in the colonial war against Ethiopia. The agent was used against Ethiopian soldiers and against the civilian population and led to mass murder. Agricultural land was also contaminated with mustard gas and entire villages were incinerated. Mustard gas was used in many other places.

There is much evidence that mustard gas was used in the Dersim genocide in 1937/38, when Mustafa Kemal Atatürk had thousands of Alevi Kurds gassed in caves. In May 2019, previously unknown documents from the Turkish state archives had been published, showing that the “Father of the Turks” had signed a secret decree on August 7, 1937, ordering 20 tons of chemical warfare agents and an automatic filling plant in Germany. The warfare agents purchased through the Turkish Embassy in Berlin were yellow cross/mustard gas and chloracetophenone, a substance similar to CS gas.

Mustard gas is mainly absorbed through the skin, but its vapors also affect the respiratory tract. Mustard gas is a strong skin poison and carcinogenic. On the skin, mustard gas causes severe burns and chemical burns. Large blisters form, which cause severe pain. The resulting injuries heal very poorly because the tissue is permanently destroyed and cell division is inhibited. Largely affected limbs have to be amputated. Inhalation of the toxic vapors destroys the bronchial tubes. Also the eyes react sensitively to the vapor of mustard gas. Consequences are temporary or permanent blindness of the eye. Since eyes are able to regenerate to a certain extent, there is hope for healing, even if this can take months.

Particularly dangerous with mustard gas is that the person initially does not feel the absorption on the skin, because neither signs of cold or wetness are felt, thus the victim does not notice the poisoning. Mustard gas whether in liquid form or as a gas penetrates through commercially available textiles and develops its effect only after a longer period of time.

Mustard gas is controlled as a Schedule 1 chemical in the international disarmament treaty CWC by the UN agency responsible for this, the OPCW, based in The Hague. Its development or possession for military purposes is prohibited.

Coordinated actions against the silence on the use of chemicals weapons